This map doesn’t show the US in 30 years 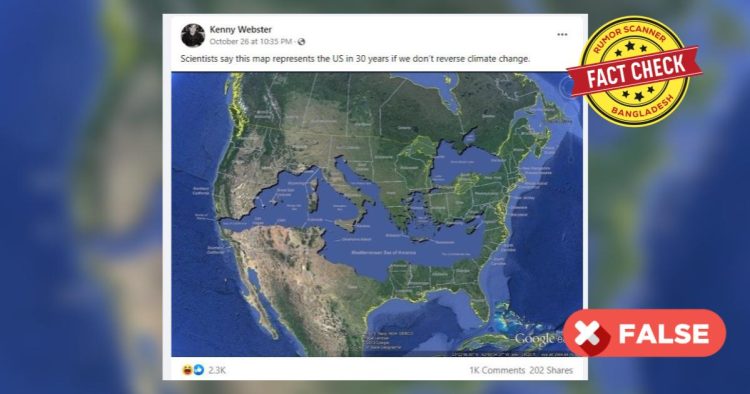 Recently, ‘Scientists say this map represents the US in 30 years if we don’t reverse climate change’ titled information is being shared on social media, attaching an image of the map.

Scientists say this map represents the US in 30 years if we don’t reverse climate change. pic.twitter.com/AVvERr4Y4a

From the investigation by the Rumor Scanner team, it has been discovered that the image of the map does not show the impact of climate change on the US in 30 years, rather this image was created to satisfy some cartographic curiosity.

Actually, Bret Drager had taken a vacation near the Mediterranean sea and he was inspired to compare the size of the Mediterranean to the U.S. by using screen grabs and “lots of graphic manipulation” to see which states and coastlines would be affected.

The author of the post wrote in the Tumblr post that “I tend to have a yearning for cartography. It may stem from my background as an architect, an artistic, technical, and graphically based profession.”

“I was examining maps and globes and realized that the Mediterranean Sea is at the same latitude as the United States. If only it were possible to rotate the Mediterranean Sea around to our side of the planet? Would it fit? What effect would this have? What about the states… new coastlines in the middle of the country… new relationships… states torn in pieces?”

“A couple of screen captures, lots of graphic manipulation and now we know. The Mediterranean Sea fits within the confines of the United States of America.”

The viral map is not related to climate change. Rather, it’s just an interesting map a curious cartographer made to compare the size of the Mediterranean Sea to that of the continental United States. But according to National Geographic, there are expected to be some climate-related changes in the coming decades.

So, the claim that an image map shows the impact of climate change on the US in 30 years is false.