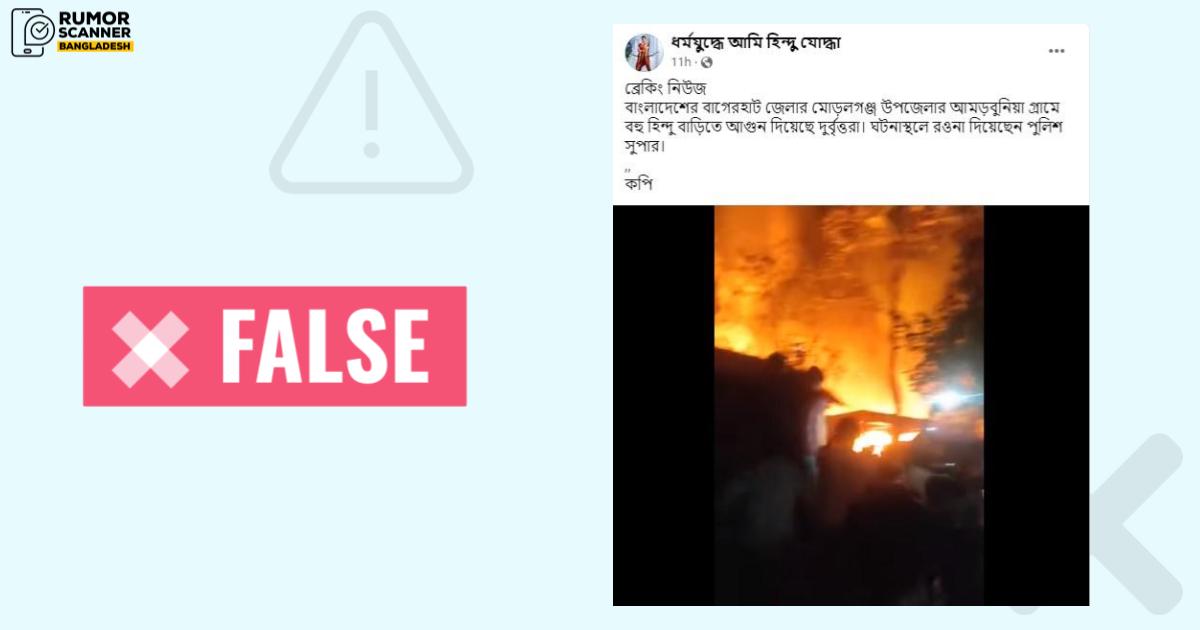 Recently a video has spread on various social media outlets, titled “Breaking News, many Hindu houses are set on fire by the miscreants in Amorbunia village of Morrelganj Upazila in Bagerhat district. The Police Super has started visiting the area” 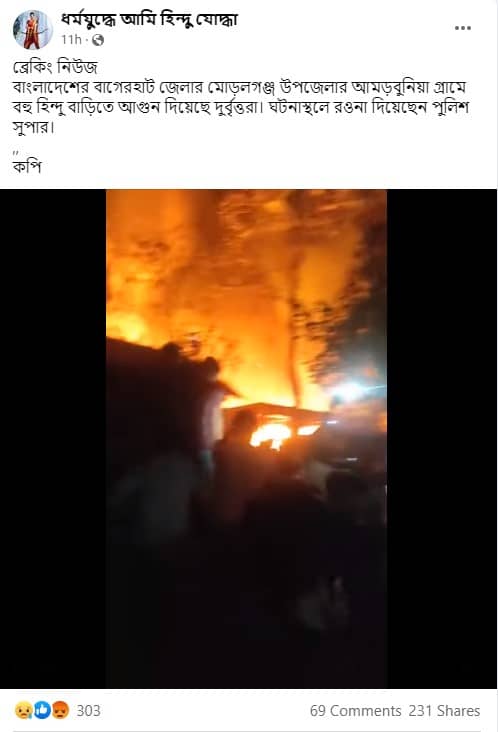 The video of 2 minutes and 56 seconds in length was spread claiming that it was a video of arson in many Hindu houses in Amorbunia village of Morrelganj Upazila of Bagerhat district.

It has been learned from the Rumor Scanner team’s investigation that the published video claiming arson in Hindu houses in Amorbunia, Morrelganj of Bagerhat district is not of such rather the video was from the event of arson in Kabiraj bari in Samitirhat Union of Fatikchhari in Chittagong.

The main video was discovered using keyword search by using the published video’s videographer’s statement of the place of arson. Muhammad Naim Bhuiyan’s facebook account published a video on March 18 claiming titled “Arson in Kabirajbari Prokash Hindu Bari, west side of Samitirhat”. From the video’s title, it was learned that this video was broadcasted live during an event of arson in a Hindu neighborhood named Kabirajbari of Samitirhat of Fatikchhari, Chittagong. 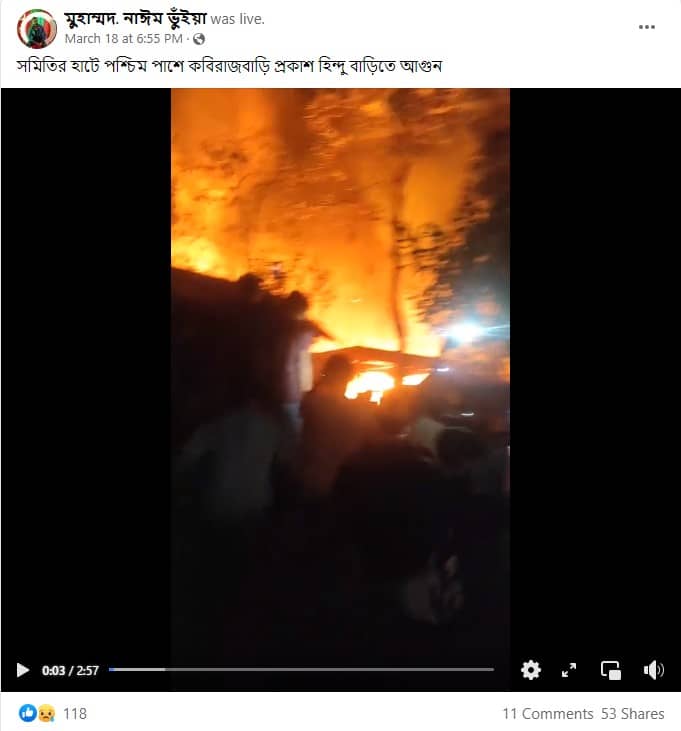 Later, a post on Facebook given by Md. Aynal Halder was found, during a search for finding the reason behind the arson of Kabirajbari.


In the post, he stated, (His post has been translated)
“Electric short circuit has led to fire hazar and destroyed Madhu’s house in the Hindu area of ward no 8 of Samitirhat Union. Affected families have been given financial support. Ministry of Disaster provided two bundles of iron sheets and 6 thousand taka, Upazila Parishad of Fatikchhari has given 5000 taka to each family.

Therefore, it is confirmed from the aforementioned post that the video published titled “Arson in Kabirajbari Prokash Hindu Bari, west side of Samitirhat” was actually a video of an electronic short circuit led to fire hazard.

Apart from these, a video report on the assistance given by Fatikchhari Puja Udjapon Committee and Hindu-Buddhist-Christian Unity Parishad to the affected families was found on a Facebook page called Fatikchhari Sangbad.

Originally, a video of an electric short-circuit led fire hazard in the Samitirhat Union of Fatikchhari in Chittagong is being spread on Facebook claiming to be a video of arson in Hindu houses in Amorbunia village of Morrelganj Upazila in Bagerhat.

Also Read: This video of fire incident is from India, not from hindu village of Pirganj

It is to be mentioned that, allegations of arson in a haystack, attack on a house and nearby temple, and vandalism are made after one Koushik Biswas has posted a status on Facebook insulting Prophet Muhammad (SWT). Police have arrested Koushik Biswas for the controversial post on Facebook. Also, 7 people have been arrested for attack and vandalism. Efforts are ongoing for the arrest of others associated with vandalism as said by police.

The police have stated, that allegations are made against Koushik Biswas, son of Romoni Biswas of Amorbunia village who has allegedly shared status insulting religion in his Facebook posts. After the occurrence spread, local religious Muslim people has brought protested against Koushik Biswas demanding strong punishment before the Tarawih prayer on Monday. At a moment, Koushik Biswas’s house was vandalized and the haystack was set on fire.

Hence, the “Arson in many Hindu houses of Amorbunia village” of Morrelganj Upazila in the Bagerhat district titled video is completely fake and the information is exaggerated. 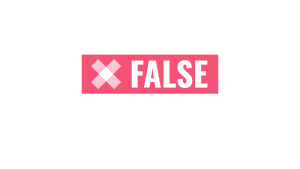