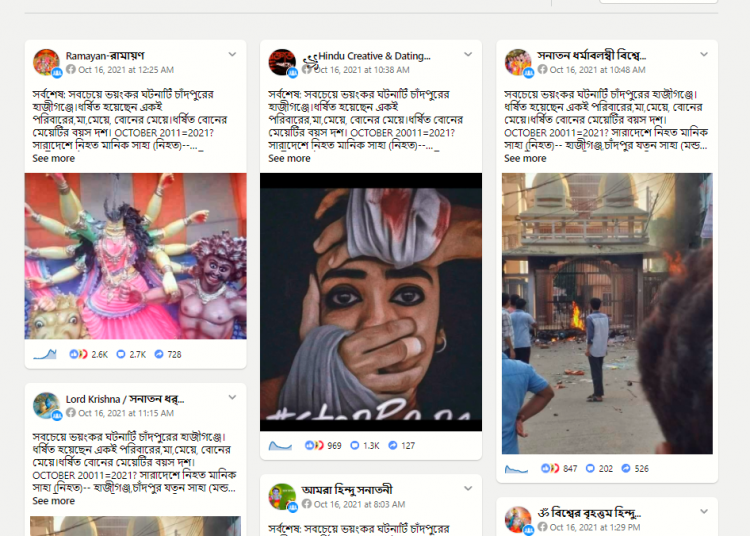 No truth was found in the claim of rape of mother-sister and 10 years old daughter from the same family according to Rumor Scanner team’s investigation, Rather President of Haziganj Puja Udjapon Parishad, Ruhidas Banik said that the information is completely rumored and made-up.

On 15 October Friday night, various Facebook IDs started spreading the news that “Mother-sister and 10 years old daughter from same Hindu family got raped in Haziganj, Chandpur. The oppressed victim’s family was moved to a secured shelter but the raped girl has died.’

However, in those posts, the authors did not provide any sources. Various people asked for sources via Comment but the authors replied that due to the security issue of the family no sources can be provided and thus they avoided them. One Facebook user also claimed that the occurrence happened in Noakhali. Also, A few posts claiming to be the photo of the victim family has been found on Facebook. View the archive here. Apart from this, The image has been also found in a YouTube video titled “Documentary image of Hindu torture in Bangladesh” from 2017. View another similar video here. View the archive version here.

Therefore, the image is from an incident from 5 years ago or more.

Regarding this issue, Haziganj Police Station Officer in Charge Harunur Rashid told local journalists, “Many rumors spread after occurrences took place in Haziganj. This is also a rumor. No one came to file a case or allegations regarding the rape”.

Since the topic spread rapidly in social media, it also gave birth to a discussion about this abroad.

It is to be mentioned that many protests and violence took place around in the country after insult happened to the holy book of Muslims’ The Quran in a Hindu Puja Mandapa. Therefore, the claim that a mother-sister and 10 years old daughter was raped is completely made-up and rumor.