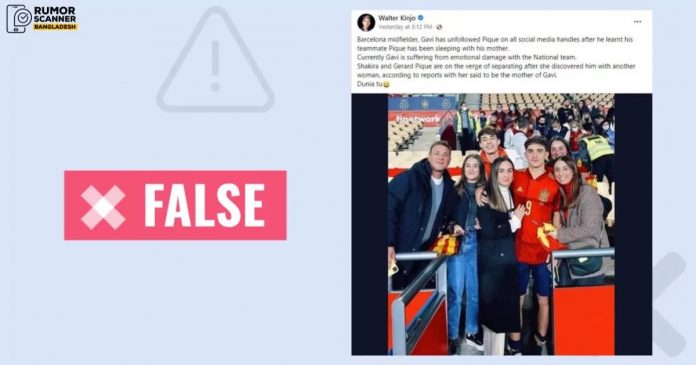 Recently a claim has spread on various social media outlets, titled “Gerard Pique recently ended his relationship with Shakira and began an affair with the mother of Barcelona teammate Pablo Gavi”

Besides, regarding this topic news has been published in the local mainstream media ‘Prothom Alo‘ and a video report has been published on the youtube channel of ‘Somoy News‘ and on the Facebook page of Channel 24. The archive version can be seen here, here & here.

According to the rumor scanner’s investigation, the relationship between Gerard Pique and his teammate Pablo Gavi’s mother is not true rather this baseless information was first disseminated from a parody Twitter account mentioning a fake source.

Is pique in a relationship with Gavi’s mother?

According to the investigation, the information about Gerard Pique and Gavi’s mother was initially shared via a Turkish Twitter account called Le Marks Sports.

According to google translator- “Shakira caught Gerard Pique having an affair with another woman. That woman turned out to be the mother of young Barcelona star Gavi. Gavi is unaware of the incident. (El Periósico)”

This Twitter account revealed news about Shakira Gerard Pique having an affair with another woman, and that lady is the mother of the young Barcelona star Gavi, mentioning El Periósico as a source.

But no such publication as El Periósico was discovered. However, a Spanish newspaper named El Periódico was found which was the first to report about Shakira and Pique’s relationship breakdown.

So El Periósico has been identified as the source altering El Periódico.

Meanwhile, according to the Spanish newspaper El Periodico, there is no information about the spotted woman being Gavi’s mother. According to another report from El Periódico, the woman is a 20-year-old student.

El Periodico reporter mentioned in that report, “A 20-year-old blonde girl is the one driving Pique and Shakira to the brink of breaking up. She’s a student and also works as an event hostess.”

It is also stated that Pique has been spotted with a young woman on multiple occasions. Shakira is irritated by that, that’s why Pique has moved into his bachelor’s apartment.

So it is clear that the woman who is said to be dating Pique is a young woman & around 20 years old. On the other hand, Pablo Gavi himself is around 18 years old. So the woman is unlikely to be Pablo Gavi’s mother. As a result, including the name of Gavi’s mother in this buzz is false.

Again, In Bangladesh, this information has been spread by numerous sources referring to journalist Gerard Romero. But no post was found on Gerard Romero’s official social media accounts.

Mainly this information was circulated from a fake Facebook page of Gerard Romero & this fake page has been operated from Bangladesh.

Many people shared the news by thinking that it has been published from the official page of Gerard Romero.

However, an inquiry revealed that the page is fake. The page was founded in 2016 under the name ‘Chup Haramzada’ as can be seen in the transparency section of the page. And was renamed Gerard Romero on January 15 of this year. It has changed its name four times before on various dates.

Based on this incident, many users are spreading that Pablo Gavi unfollowed Gerard Pique on Instagram. Hence this is incorrect.

Pablo Gavi is still following Gerard Pique, as seen in the following portion of his official Instagram account.

What happened between Shakira and Pique?

The following are some of the reasons offered by the Spanish media for saying that the Barcelona captain and the Colombian singer are having an emotional crisis:

Pique has been living in his bachelor apartment for the last few weeks, Pique is absent from Sakira’s social accounts since March, he has been spotted at night club very often nowadays, Pique has been spotted hanging out with another girl several times, and the lyrics of Shakira’s latest released songs, etc.

Pique and Shakira did not comment directly on news in the Spanish newspaper El Periodico regarding Pique-Shakira’s relationships. This topic is still buzzing.

Also Read: These are not bags of dead migrants those tried to enter Europe illegally by sea

It is to be mentioned that the Pique-Shakira pairing is one of the most well-known around the world. From the 2010 Africa World Cup, Colombian pop sensation Shakira began dating Spanish footballer Gerard Pique of Barcelona. Even though they have not been married for 12 years, this pair has two children.

So the claim that Gerard Pique is in a relationship with his teammate Pablo Gavi’s mother and for this reason Gavi unfollowed Pique on Instagram is false.